The Coming International Community of Families

On this third anniversary of Learning Life’s Family Diplomacy Initiative (FDI), we are excited to report that we have been busy this summer preparing for the Initiative’s significant scale up, and name change.

Following the tragic terrorist attacks in Paris, France in November 2015, and in keeping with Learning Life’s mission to spread learning beyond school walls in innovative ways, FDI was established to develop a novel approach to tackling the world’s vicious cycle of terrorism and xenophobia.  As a caring-focused institution widely valued across cultures, we believe the family constitutes a potentially powerful force for promoting mutual empathy and a more caring world.  Hence, for the last three years we have been developing FDI, first testing small-scale projects, and soon scaling up online. 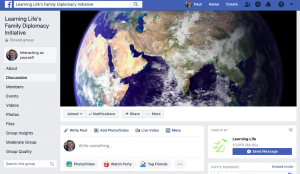 Three years ago, on August 27, 2016, Learning Life held its first live international family-to-family video dialogue between two American families in Washington DC and one Senegalese family in Dakar, the capital of Senegal.  In December 2017, we completed our first project, which engaged lower-income families in Washington DC, Dakar, Senegal, and Jerash, Jordan in taking and sharing photos of their respective communities online, ultimately producing a comparative community photo album.  In April this year, we completed a second project involving lower-income families in Washington DC, San Salvador, El Salvador, and Dakar, Senegal in learning about each other’s food cultures as well as nutrition.  That project, done in collaboration with Georgetown University School of Medicine, yielded two research projects comparing food cultures, plus a second project report issued July 1 documenting the progress our families made in their knowledge, interest and warmth toward the peoples with whom they communicated.

Since May, we have been gathering a large list of relevant organizations in six countries — Argentina, El Salvador, USA, Senegal, France and Australia — in preparation for expanding our Facebook group.  Our purpose is to develop an international community of families learning about the world through educational content we provide, and importantly, through sharing photos, videos, and information about their lives.  Between September and December this year, our goal is to at least quintuple the number of members of our Facebook group, primarily from those six countries.  We chose those six countries given their relative political stability, geographic dispersion, prior Learning Life connections (in the case of the USA, El Salvador and Senegal), and the major languages they speak: Spanish, French or English.  We anticipate including families that speak other languages in the future, but for now families do not have to come from these six countries to join; they just should be able to read and write in English, French or Spanish.

This Facebook group expansion will substantially scale up international engagement with FDI, from two dozen to thousands of families by 2020, all with an eye to advancing a family form of diplomacy in the long-term.  “Getting larger numbers of families worldwide to share and learn from each other in a supportive online community is the next big step in the evolution of our Family Diplomacy Initiative.  We’re excited to see what happens!” said Learning Life’s Founder, Paul Lachelier.