In light of mounting concerns about the condition of democracy at local, national and international levels,  Learning Life launched its first Democracy Dinners in June in Washington DC, with more planned in August and beyond. 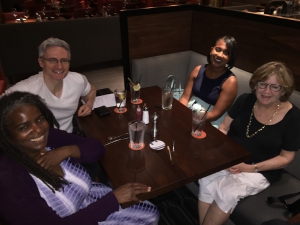 The Presidency of Donald Trump has raised numerous concerns about democracy.  Some of these issues are relatively new, like the proliferation of “fake news” and the influence of Russia on public opinion, American elections and high-level government officials, including the President.  Some are longstanding, though now resurgent or more apparent, such as white supremacy movements, Congressional and activist polarization, executive overreach, government corruption, and distrust of the press.

But there are also worries about democracy at local and international levels.  At the local level, citizen participation in American school, city and county elections and governance remains lackluster.  Middle and upper class citizens as well as developers and other businesses tend to dominate decision-making, usually in their favor.  Abroad, more authoritarian leaders have been elected in a number of countries in recent years, including Turkey, Brazil, Italy, and the Philippines, and movements hostile to immigrants, minorities, press freedom, and other elements of diverse democracies are growing.

Given all these and other concerns about democracy, fortunately there are already organizations, new and longstanding, working to bring Americans together across political and social divides, including Bridge Alliance, Better Angels, Make America Dinner Again, Courageous Collaborations, and the Bipartisan Policy Center.  Yet clearly more can be done given the wide variety of current threats to democracy.

As the capital of the United States, Washington DC — where Learning Life is based — is home to many influential organizations 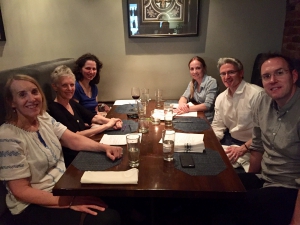 and individuals who work for pay or free on a wide range of democracy issues local to global, including voting rights, voter mobilization, campaign finance reform, economic democracy, empowering the marginalized, government transparency and accountability, democratization, citizen diplomacy, citizen education, civic engagement, criminal justice, human rights, civil liberties, and more.  However, infrequently do people in this broad democracy sector have the opportunity to talk to each other across their specialty silos about their work, and the complexities, challenges and possibilities of/for democracy.

In June, Learning Life launched its first Democracy Dinners in Washington DC with an eye to bringing together democracy activists, academics and professionals across these specialty silos.  In contrast with the lectures, panel discussions, and networking events so common in Washington DC and other communities, Learning Life’s Democracy Dinners are purposefully smaller and more participatory, in keeping with the spirit of democracy.  Four to six participants are invited to meet at a restaurant in DC, they introduce themselves, talk about their own work and discussion questions about democracy, then pay their own food bills.  “The purpose of the Dinners is to encourage activists, academics and professionals to meet and talk about their work, enrich their understanding of democracy’s facets, developments and problems, and foster collaboration when and where participants want it,” Learning Life’s Director, Paul Lachelier, explains.

The first two Dinners, on June 23 and 24, involved four and six participants, respectively, including Lachelier who facilitates the conversations.  Participants included public affairs and political science professors from American University and the University of Maryland-College Park, a sociologist, a rural policy expert, a grassroots media trainer, a federal defense and human rights lawyer, a National Democratic Institute employee, and a nonprofit leader advancing global education in DC.  The conversation ranged widely from race, segregation and gentrification in Washington DC, to LGBTQ rights and human dignity policy in international governance.  Photos of the first two Dinners’ participants are featured in this post.

The next Democracy Dinners are scheduled to take place on August 4 and 6.

Learn more about Learning Life’s Democracy Dinners here.  If you live in metro DC and would like to be added to the Democracy Dinners invitation list, please email us at email@learninglife.info with your resume, Linkedin profile page, or personal website. We do not guarantee that everyone will get on the list, but if a person lives in metro DC and works or has experience in the democracy field, they will be added to the invitation list.

« Food Culture Project Results Are In! » The Coming International Community of Families