On Sunday, October 9, 2016, two new American families joined Learning Life’s Citizen Diplomacy Initiative (CDI) )in a live dialogue with a family in Senegal.  The families posed questions to get to know each other then learned more about our developing international photovoice project. 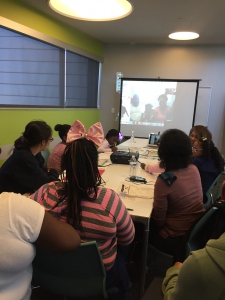 These were some of the questions the families posed to each other, and their answers revealed both differences and commonalities.  For instance, on differences, the Diagne family is Muslim, as are 90%+ of Senegal’s 14 million people.  This means they celebrate very different holidays, like the recent Eid Al-Adha, a four-day Muslim religious observance in which, following tradition, many Senegalese slaughter a sheep and shared its meat.  On similarities, the families 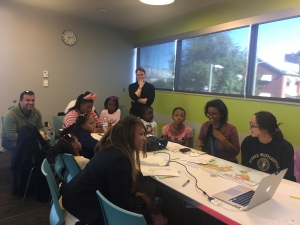 learned that they share a taste for some American musicians, like Beyonce.  They also like to dance, which led, as in previous CDI dialogues, to live demonstrations of each other’s preferred music and dance (videos of some of these dances coming soon!).

This U.S.-Senegal live dialogue was a first for two American families living in Washington D.C.  One D.C. mother, Janelle, brought her two daughters, Bianca (11) and Kristin (7) to the dialogue.  Another mother, Sharon, brought her daughter, Kennedy (11) along with three young cousins.  (Also in attendance were Learning Life volunteers, Emilie, Alisse, Carolyn and Steve.)  Here are some of their written responses to our survey following the dialogue: 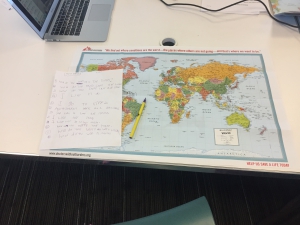 “We connected and nobody felt uncomfortable.  All of us had fun.  Their language is way different than ours.”

“They do just about everything we do: work, go to school, make clothes, dance, etc.”

“After speaking with the family, they are very similar to my family.  However, they seem more friendly than Americans.  I don’t know much about the history or political climate, [so] will ask during the next session.”

As in previous CDI dialogues, the participants in Sunday’s session expressed strong interest in continuing the dialogues.

After a preliminary “get to know you” dialogue like this one, Learning Life moves participating families toward a project intended 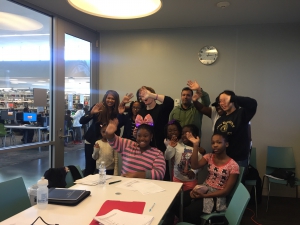 to develop participants’ knowledge, skills and interest in local and international affairs.  The first project is a international “photovoice” album that will gather the participants’ photos in answer to the question “what is the past, present and future of your community?”  Learn more about this project here.

Stay tuned for news of our upcoming dialogues and developments in our Citizen Diplomacy Initiative!

Thanks to Learning Life volunteers, Emilie Mondon-Konan and Alisse Palmer, for translating participants’ words from English to French and vice versa during the dialogue.  Thanks also to Carolyn Rider, who helped take photos (some displayed on this page) and video of the dialogue.

« About Our PhotoVoice Project » How Women Fare in the U.S. vs. Other Nations