Our world is becoming more complex and interdependent as more people, goods, services and interactions flow across national borders.  This changing global reality has triggered xenophobic, sometimes violent reactions that have been validated and amplified by political activists and opportunistic leaders.  Diplomacy is rightly upheld as an important response to the mounting tensions within and between some countries, but diplomacy should not be left strictly to professionals.  The internet and smart phones open exciting possibilities for citizens to be involved in diplomacy to help promote peace, prosperity and justice, but success and our global future depend in part on fresh approaches.   This is the second in a series of posts intended to develop family diplomacy as a new form of citizen diplomacy.  Read the first post here.

Thanks to Learning Life intern Marley Henschen for her assistance in the research for this post.

Diplomacy can be simply defined as the management of international relations.  Yet the adjective “diplomatic” — that is, dealing with people tactfully — suggests diplomacy is a broader social art or ethic especially needed in our divided world.  Given international divides sometimes erupt into violence, why would one want to get families involved?  Here are five reasons.

The search for common ground is one of the staple practices of diplomacy, and if there is one institution which people across the world commonly cherish it is probably the family.  While precise international evidence for this common value is harder to find, according to the World Values Survey, strong majorities of people in 29 countries worldwide — from 75% in India to 99% in Colombia — believe that “more emphasis on family would be a good thing” (Social Trends Institute).  Similarly, a 2019 Pew Research Center survey of people in 27 countries found that 58% overall believe family ties have weakened over the last two decades, and majorities in all the countries think those ties should be strengthened (Pew 2019).

Families are impacted by most international forces and trends, from war and terrorism, to trade and immigration, to climate change and disease transmission.  Because families are widely valued and vulnerable to so many international forces and trends, advocates and policymakers frequently call for the protection and support of families, but rarely for their political empowerment.  Individual citizens in liberal democratic societies are free to, and in some cases expected to participate in the decisions that affect their lives (at least by voting for their government representatives).  In corporatist countries like Germany, Ireland, Sweden and Norway, groups like business associations and labor unions — not just individuals — have a say in government decisions that affect them.  Families, like businesses and labor unions, are impacted by government decisions, and have distinct interests and associations representing them on various issues.  So, why shouldn’t families also have a seat at the decision-making table, at local to global levels, including international diplomacy? 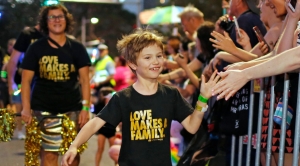 Involving families in diplomacy can also empower kids, parents and grandparents as global citizens by nurturing valuable experiences, contacts and skills as well as a larger sense of purpose and significance.  For these and other reasons, there is considerable interest in the United Nations to include youth in decision-making (see, for example, the 2009 UN Convention on the Rights of the Child, General Comment #12).  Yet far less thought is given to involving kids as members of families, including parents, grandparents and guardians. Of course, not all families speak with the same voice, nor do their members speak with equal status, and some voices — especially those of women and children — are often routinely stifled or subordinated within families.  But not all families need be engaged in diplomacy.  Families that demonstrate interest in diplomacy can be selected from all classes and countries, and should model not only interest, but tolerance and equality so that all people can see men, women and children unafraid to participate.  Further, parents, grandparents and children can form distinct groups that meet separately then together to develop then share their respective concerns about, aspirations for, and interests in world affairs.

For most of human history, most kids in hunter-gatherer then settled agricultural societies spent most of their time at work, rest or play with their families and larger kinship groups.  With the proliferation of factories and schools in the 1800s, more kids spent more time segregated from their parents.  In the most modern societies marked by rapid change, commercialism and individualism, families now spend a minority of their waking time interacting, and seem increasingly strange to each other because rapid change sharpens generational differences, individualism nurtures a desire to lead separate lives based on interests rather than kinship, and commercialism turns families’ attention toward products (screens, games, shows, clothes, music bands, etc.) rather than each other.

There is ample evidence that youth who spend more time alone or in groups of youth unsupervised by parents or other responsible adults are more likely to get injured, do worse in school, and develop behavioral problems, including risky behaviors like consuming alcohol, cigarettes and drugs (Warr 1993, Pettit et al. 1997, Kerrebrock & Lewit 1999, Mott et al. 1999, Colwell et al. 2001, Updegraff et al. 2006, Keijsers et al. 2012).  There is no turning back to hunter-gatherer or agricultural societies to bring families back together, nor should we want to return to those harsh, precarious eras.  But if modern people still value families, and family supervision encourages kids to act more responsibly, then involving families — not just youth — in government and diplomacy can be a modern vehicle for bringing families together, and for socializing kids as responsible global citizens.

The preceding three reasons deal more with how families would benefit from their involvement in diplomacy.  This fifth and last reason points to a benefit for families and diplomacy alike.  That is, involving families in diplomacy can promote a culture of care in and beyond the family.  Families play a distinct if not unique role as a care-giving institution.  Families can look very different — large, small, multigenerational, bi- or multi-national, inter-racial, straight, gay, with one, two or more parents, with adopted kids, etc. — but they all tend to have the same fundamental purpose or aspiration: to care for each other.  Publicly elevating (e.g., highlighting, rewarding, publicizing) family care-giving, by making families part of government and diplomacy, has the potential to inspire more caring not only among families, but also in government policy and practice.

In these fractious times, caring families could be a potent force for a more peaceful world.

Mott, Joshua A., Paul A. Crowe, Jean Richardson, and Brian Flay. 1999. “After-School Supervision and Adolescent Cigarette Smoking: Contributions of the Setting and Intensity of After-School SelfCare.” Journal of Behavioral Medicine 22(1): 35–58.