“I’m a jack of all trades, master of none,” says Learning Life volunteer, Craig Gusmann, when asked to describe himself.

“In my relatively short life,” he goes on to explain, “I’ve earned a black belt in Tae Kwon Do, won a Dodgeball championship, wrote a feature length film that was independently produced, worked as a machinist, taught science, created lighting and effects for independent films, and most recently worked as a proposal writer.” 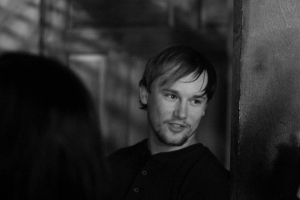 Craig does, however, aspire to master one trade: screenwriting.  To understand every aspect of film production, he has volunteered for various creative and non-creative roles – gaffer, grip, writer, production assistant, and assistant director.  He also wrote his own film, Granted (learn more and check out the film’s trailer here), that played at several film festivals nationwide, and has developed his own blog about screenwriting, to which he diligently posts every few days.  True to his humorously self-effacing manner, Craig titles the blog “Failing Up” with the subtitle “another blog about writing from someone who has never actually been paid to write” (this isn’t quite true though as the next paragraph will reveal).

A native of Buffalo, New York, Craig attended its Academy for the Visual and Performing Arts, then majored in Media Study at the State University of New York in Buffalo.  Upon graduating from college in 2009, Craig worked for Americorps and other organizations teaching science and creative writing to at-risk urban youth.  He moved to Washington D.C. in 2012 and began working as a writer for companies seeking federal contracts, researching, drafting and editing project funding proposals to a variety of government agencies including the Department of Homeland Security, the Defense Information Services Agency, and the National Institute of Standards and Technology.  (Thus, Craig has in fact been paid for his writing, even if he hasn’t as yet been paid for his creative writing.)  In 2013, he began life as a freelance writer.

Craig Gusmann joined Learning Life on December 16 last year.  On that first day with us, Craig served ably as Learning Life’s photographer documenting the culmination of our Newseum project: the distribution of 10,000 napkins about John F. Kennedy’s presidency in restaurants in several neighborhoods across Washington D.C., followed by street re-enactments of excerpts of Kennedy’s historic inaugural address at several high-traffic locations in D.C.

Craig then ably produced Learning Life’s very first video, a promotion based on our work with Washington D.C.’s Newseum to help educate the public about Kennedy’s extraordinary presidency.  Craig has gone on to research and draft two quizzes on astronomy (one of his many interests!) – one about the sun, the other about the stars – then quizzes African American history, women’s history, and most recently, Asian American history (just out as May is Asian American History Month).

He has also assisted in expanding and systematizing Learning Life’s social media posts, learning about area farmers’ markets as part of our business development research (more on this to come!), and is in the process of investigating the possibility of recording expert interviews for our Big Questions Series (see, for example, our series on terrorism). In addition, Craig will soon add to the series several astronomers’ answers to the big question, “is there life out there in the universe?”

Asked why he volunteers with Learning Life, Craig responds, “Learning Life’s mission reminds me a lot of Americorps and what I loved about teaching science with them.  I firmly believe that solving any problem in life requires a thorough understanding of the issues and facts related to the problem.  Learning Life not only facilitates easy access to these facts, but does so in a way that can be immediately applied by people in various situations.”

Learning Life considers itself lucky to have Craig’s help.  Craig may not yet be a master of any trade, but he has proven himself quite able at manifold tasks with Learning Life, and that should be attractive to any employer.  If we could hire him, we would.

To learn more about volunteering or interning with Learning Life and other ways you can help, contact us at email@learninglife.info.