On Saturday, September 17, Learning Life’s first in-person event in over 2.5 years drew metro Washington DC residents to a rich, participatory discussion of one of the most salient political issues in America today — polarization — and launched an ambitious new community devoted to advancing democracy and diplomacy in the USA and abroad.

The event, co-sponsored by the Eisenhower Institute at Gettysburg College, featured a panel of three speakers: 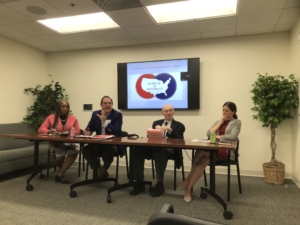 Seth David Radwell, former business CEO and author of American Schism: How the Two Enlightenments Hold the Secret to Healing Our Nation.

Nealin, among other things, offered an international perspective, noting that while violence overall has declined markedly in the past 500 years of world history, more violence is now coming from non-state actors, like terrorist and militia groups.

Radwell presented some of the historical and philosophical underpinnings, distinguishing moderate and radical wings of American politics since the nation’s founding that inform polarization today.  “In addition to our partisan bubbles, we are caught in a time bubble that inhibits any illuminating historical or longitudinal perspective,” Radwell argues in his book. 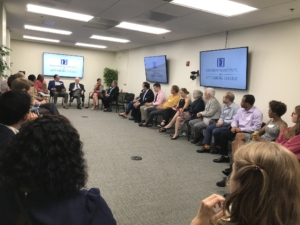 Schneider, in turn, focused on political developments since the 1960s to help explain current American polarization.  “Class conflict [of the 1930s] has given way to cultural conflict” since the 1960s, with religiosity (not what church, but how often one goes to church) and education (especially whether one has a college degree) dividing Americans.  The corresponding shift from a focus on material interests to moral values makes it harder to compromise since values are more central to people’s identities.

Readers can view the speakers’ full presentations here via the Eisenhower Institute’s Youtube Channel.  Following the speakers’ remarks, participants formed a circle to talk with each other about American polarization.  The rich discussion ranged widely, from human nature, to the state of American civic education, to social media effects on polarization, to existing efforts to tackle the problem, including the work of Common Ground USA, Braver Angels, The Bridge Alliance and Learning Life’s own Democracy Learning Community.

This discussion was the first in a series of events Learning Life has planned as part of its new, overarching Democracy & Diplomacy Community (DDC).  The DDC builds on the over 25,000 people worldwide connected with Learning Life’s work to foster international learning, networking and action on democracy and diplomacy “because the problems we face demand not demagogues and strongmen, but rather citizens and diplomats.”  Learn more and join the DDC here.