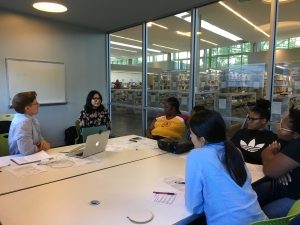 Following on two prior dialogues dedicated to introducing the Salvadoran and American families to each other, the conversation in this third dialogue between these families turned to the nature of community and community change, and how to answer the question “what is the past, present and future of your community?” in photos.

“Community” is a commonly used, widely cherished, but seldom defined term.  If community is defined in terms of shared interests, activities and/or goals, then a group of friends, a business association, or a sports team can be seen as communities.  As Kaniya, an 11-year old American participant in the international dialogue noted, she feels that her school basketball team (on which she is one of the star players) is a kind of community because they work together toward shared goals.

But in the most common parlance, community is place-based, and local, like a town or neighborhood.  It is also something to 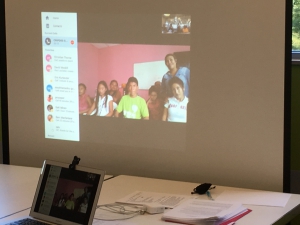 which people often feel emotionally attached, especially as they develop meaningful experiences and memories of sites, sounds, textures, tastes and/or smells involving certain people, places and activities.  And, as Danjha, one of our Spanish interpreters noted during the dialogue, that attachment can inspire a sense of goodwill and reciprocity between community members. Communities as localities in which people live, work and play thus have tactile and emotional components.

They also change to varying extents with time.  In a modern world characterized by rapid social change, communities can change visibly in the span of just a few years as new homes, offices, factories, stores and other landmarks go up, old ones come down, and different people move in and out.  That change — the past, present and future of communities — can be captured in photos of people, events, objects, buildings and larger scenes.  For example, as Terri, one of the mothers participating in our live dialogue noted, a statue of a slave fighting for freedom in her neighborhood can say much about the past of her community, just as a photo of a current neighborhood leader next door to her can speak to the present civic strength of her community. 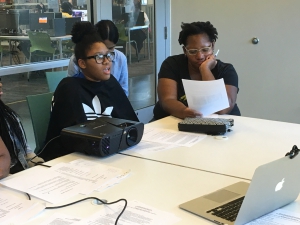 Each person can bring a different perspective to community change by photographing different things, capturing those things in varied manners (playing with different angles, times, distances, lighting, color, props, etc.), and labeling or describing photos in diverse ways.  “Photovoice” projects recognize that photographs are selective representations of reality, and that people can exercise their voice through the photos they take and how they take and describe them.  Photovoice also recognizes that different people can look at the same photo in very different ways. 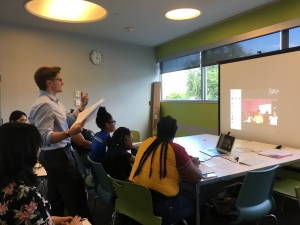 It is with these and other thoughts in mind that we embark on a photovoice project over the next several months that will culminate in an international photo album composed of photos our participating families take in five communities across the world — in the United States, El Salvador, Senegal, Jordan and the Philippines.  Learning Life plans to publish the photo album online, and have willing family participants co-present the album in local and international public presentations.  This album will be the tangible outcome of the first of many planned international projects we hope our Citizen Diplomacy Initiative families will engage in to develop their skills, knowledge, interest, perspectives and social connections as rising citizens of the world.

Special thanks to Learning Life volunteers, Karen Tituana and Danjha León for their assistance with language interpreting, and Cintia and Antonio with CRIPDES, our nonprofit partner in El Salvador, for their help in facilitating the dialogue.