Thanks to Learning Life intern Thalia Navia for her assistance in the research for this post.  Some data in this post was updated on May 13, 2020.

Globalization is increasing, and for good reason.  Advances in transport and communication technologies are making it easier for people to travel and talk across national borders.  This leads to greater trade and movement across borders, which in turn brings people more and cheaper goods and services as well as more opportunities to explore, learn, collaborate and prosper. 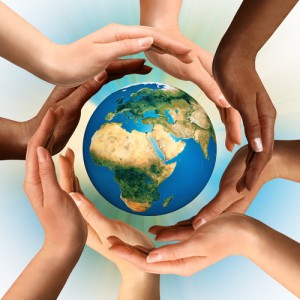 Globalization – simply defined, more connections and interdependence between countries – is driven to a great extent by businesses searching for profits.  When businesses are able to sell their goods and services to more consumers abroad, they expand their potential for growth and profits.  This helps explain why pay tends to be higher in international trade-directed than non-trade directed jobs (Griswold 2016), and why international jobs – like customer service representatives, market analysts, digital map-makers, language interpreters and translators, and airline and hospitality workers – are proliferating (Sentz 2016, Peltier 2018).

Given our world’s globalizing trend, persisting socio-economic inequities as to who participates in and leads foreign affairs threatens to further marginalize already disadvantaged groups, and undermine the representativeness of international business and policy-making.  In the United States, this is especially true for African and Hispanic Americans, who comprise 14% and 17% of the U.S. population, respectively, yet who represent just:

Unfortunately, race and ethnicity dovetail closely with income and wealth, and Hispanic and African Americans have substantially less of both than European and Asian Americans on average (Peterson Foundation 2018).  This makes it more difficult for blacks and Latinos to take advantage of travel abroad opportunities that help stimulate interest in the wider world.

While some individuals can overcome disadvantages to pursue successful international careers, it is much more difficult for marginalized groups to do so without government policies – like annual grants for travel, study and work abroad in high school and college, and consistent funding for effective international engagement programs at all ages – that widen opportunity on a large scale.  Of course, there are a number of U.S. programs that fund international study, exchanges and travel abroad, such as the Kennedy-Lugar Youth Exchange & Study Abroad Program, the Critical Language Scholarship Program, and the Youth Ambassadors Program.  However, the number of spots or grants offered are often quite limited, and those who take advantage of these programs – even programs meant exclusively to benefit ethnic and racial minorities, like the Thomas Pickering Fellowship and the Charles Rangel Summer Enrichment Program – tend to come from economically relatively privileged backgrounds.

Reformers who wish to open the world to marginalized peoples cannot create programs and expect the disadvantaged to throng to them.  If they do, they will continue to disproportionately attract privileged applicants.  Inequality segregates the disadvantaged and tends to narrow their geographic horizons, so they are much less inclined to take advantage of opportunities to engage with a world so foreign to them.  Thus, reformers must go to the marginalized, opening opportunities in direct and sustained ways in their otherwise segregated communities.

It takes time and an accumulation of experiences – conversations, books, magazines, games, films, travel, classes, volunteering, internships, work — to understand, care about, and act effectively in the world.  That’s an accumulation the advantaged are more likely to gather, little by little, as they grow up.  Absent government policies to provide marginalized groups with such bridge-building opportunities in their own communities, nonprofits can do much to open the world to the disadvantaged.  This includes mentorship, field trips, games, documentary discussions, volunteering, virtual exchanges, and other opportunities that can enrich marginalized neighborhoods, and connect the traveled and untraveled, with or without costly travel abroad.

Globalization holds much promise, but whether that promise is fulfilled for all rather than a few depends on clear-eyed purpose, sustained effort, and bridge-building to connect the marginalized to the world.