These are just a few examples of some of the fascinating findings about eating behavior one of Learning Life’s first educational partners, Dr. Brian Wansink, has produced. 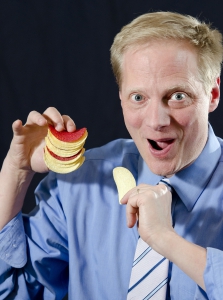 Wansink is Professor of Consumer Behavior at Cornell University, and founder and Director of its Food and Brand Lab.  Wansink and his Lab’s research documents how our food environments – homes, supermarkets, restaurants, etc., and elements like lighting, music, color, size, and wording – often powerfully influences what and how much we eat.

As Wansink told Learning Life, the mission of the Food and Brand lab is to “discover and disseminate transforming solutions to help people eat better.”

This mission and his Lab’s research have resulted in over a hundred published research articles and books, and landed Wansink in print, video and film on every continent but Antarctica.  His research also led Wansink to serve as White House-appointed Executive Director of the U.S. Department of Agriculture’s Center for Nutrition Policy and Promotion (CNPP) in 2007-2009, during which time he oversaw the development of the 2010 Dietary Guidelines, the Healthy Eating Index, and the Cost of Raising a Child Index.

As CNPP Executive Director, Wansink also helped increase the number of hits to the USDA’s dietary guidelines website (mypyramid.gov) to 5.2 million per day, a 44% increase; launched a campaign called “Partnering with My Pyramid” which mobilized a hundred companies to promote the dietary guidelines through packaging, ads, tray liners, etc.; and developed new tools like the “My Pyramid” for mothers and toddlers, and a My Pyramid menu planner, which are downloaded over 100,000 times every day, especially by teachers and students.

Wansink’s mission to shape food environments to promote healthier eating has also put him and his research on the front pages of major newspapers like the New York Times, the Washington Post and the Los Angeles Times, as well as on CNN, NBC News, ABC News, The Today Show, 20/20, 60 Minutes, and National Public Radio, among others.

Wansink writes an eating column for AARP titled “Chew on This.” In books, Wansink wrote the bestseller, Mindless Eating: Why We Eat More than We Think”(2006), and the forthcoming Slim by Design: Mindless Eating Solutions for Everyday Life 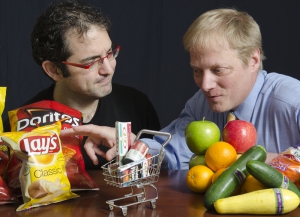 While the term “mindless eating” may suggest to some that consumers must become more mindful about their eating, Dr. Wansink’s more practical approach is to encourage food makers and servers, from major food manufacturers to homemakers, to make often simple changes – like reducing plate size, and giving healthy foods more enticing names – that can boost both sales and healthy eating.

Given Brian Wansink’s important work, we at Learning Life happily feature a quiz on our website highlighting some of his Lab’s fascinating findings, and look forward to helping him further to disseminate his research via Learning Life social media channels and everyday life surfaces.

As Learning Life’s founder, Paul Lachelier, notes, “Brian’s work is a shining example of the research university professors are doing on so many topics that are really interesting and important to people’s lives.  At Learning Life, it’s part of our mission to help university researchers spread their most interesting findings on the surfaces of everyday life, where people will see them.”

For more information about Dr. Brian Wansink and his Food and Brand Lab, visit: