One of Learning Life’s interns this summer, Kane Boynton, worked mostly from Michigan, and is still working with us this fall from the Great Lakes State generating some of our most recent quizzes.

Born and raised in Vermont, Kane Boynton’s passions are business and skiing.  Kane has been skiing since the age of 4, and has competed in ski racing internationally, most notably in Chile, France, Germany, and Austria.  He is a Vermont Alpine Racing Association U21 State Slalom Champion, and was a member of the Association’s competitive team in 2011-12.  Currently, Kane is a member of the University of Michigan Alpine Ski Team, and competes nationally as part of U.S. Collegiate Ski Association All-American teams. 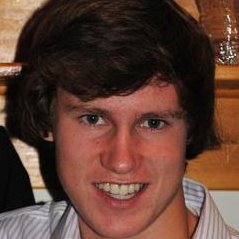 Kane’s passion for skiing has involved him in charitable work.  In 2011, he launched an annual ski race involving 250 competitors to raise money for various charities, a fundraising event he still leads every year.  Also in 2011, Kane helped Vermont residents clean up their homes and yards after the devastation of Hurricane Irene in the state of Vermont.

Kane pursues his passion for business not only as a major in the subject at the University of Michigan in Ann Arbor, but as an independent investor, actively and successfully investing in the stock market for the last eight years (which means he started investing at age 11!).  Kane’s keen interest in business has also led him to pursue diverse internships, studying battery storage companies and “end-to-end strategy and corporate development strategies” with the publicly traded San Jose solar power company, SunPower Corporation, in summer 2011, then climbing radio and cell phone towers to install and maintain AM/FM radio and cell phone antennas for Prescott Tower Services in Vermont in summer 2012.

As one of our summer interns, Kane pursued his interests in research and marketing by drafting a number of Learning Life quizzes, including the seven most recent quizzes posted about Egypt, world geography, international acronyms, U.S. income inequality, U.S. government income and spending, Americans’ spending and savings, and the Affordable Care Act (Obamacare).  He has also worked on upcoming Learning Life quizzes on a diversity of topics, including U.S. prisons and prisoners, U.S. geography, U.S. presidential history, weights and measurements, financial investment terminology, China, Mexico, heart disease, stroke and diabetes.

Learning Life is grateful to Kane for his help in researching and developing so many of our quizzes current and upcoming.  We look forward to working with you further, Kane!

To learn more about interning or volunteering with Learning Life and other ways you can help, contact us at email@learninglife.info.