On Monday this week, laughter and screams erupted from a school cafeteria in Washington DC as two student teams competed in telling stories about pressing international issues. 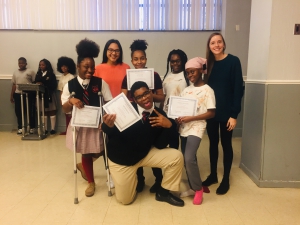 The students, 7th and 8th graders at Saint Thomas More Catholic Academy (STM) in southeast DC’s Ward 8, were participating in Learning Life’s pilot Global Storytelling Challenge in partnership with STM.  “We live in one world, we all like stories, and stories can change the world,” Learning Life Director Paul Lachelier told the students assembled to view the students’ stories.  Research on storytelling suggests that this art form can improve student engagement, visual memory, information recall and language skills as well as create a more welcoming and tolerant learning environment.  This Challenge was a first experiment in storytelling for Learning Life and STM intended to encourage youth interest and learning about international affairs. 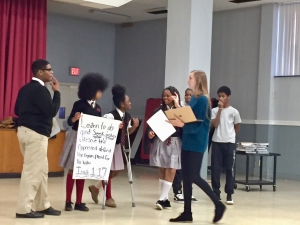 teachers, Rujjares Hans and Nichole Hutchins, both Master’s students in the International Education Program at George Washington University.  During the sessions, Ms. Hutchins and Ms. Hans first guided the students through videos and discussions to learn about various international issues that impact health, including climate change, poverty, violence against women, child labor, and human trafficking.  They then formed two teams, and each team chose an issue that interested them most and crafted a story to help inform their fellow STM students about that issue. 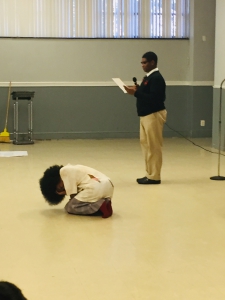 One team presented a story about a young Cambodian girl compelled to work in a village brick factory rather than go to school to help support her family.  The other team told a story of a young Sudanese girl whose mother is tricked into delivering her daughter into slavery as a domestic laborer in Brazil.  Their stories were evaluated by three judges with substantial experience in storytelling: “The Moth” storyteller Nick Baskerville, Vera Oyé Yaa-Anna, founder of Oyé Palaver Hut, and John Johnson, founder and artistic director of Verbal Gymnastics Theater Company.  The audience, composed of STM teachers, staff, and students in Grades 2-8, then had the opportunity to make some noise in support of the team they thought performed better.  The story about the Sudanese girl won the judges’ critical acclaim and the audiences’ enthusiastic screams, but both teams were awarded certificates and small cash rewards for completing the pilot Challenge.

The student storytellers and STM staff enjoyed the Challenge.  “The best part is that I had fun 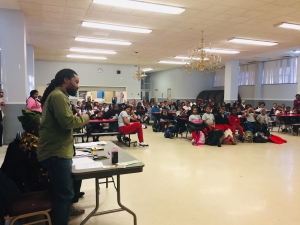 acting with my friends and learning new facts about the world,” said one of the student storytellers in a post-Challenge survey.  “STM is thrilled to have participated in this first Global Storytelling Challenge, and we look forward to working with Learning Life on the next Challenge in 2019,” said STM Principal Gerald Smith.

In coming years, pending funding, Learning Life may expand the Challenge to involve more youth in Ward 8 and possibly other communities in the world with which we work in a more competitive international storytelling contest with bigger prizes.  Stay tuned!