The United States, commonly called the US, declared its independence from the United Kingdom in 1776, and became an independent nation in 1783.  Since then, the USA has expanded to become the 4th largest nation in the world by land area, and the third largest by population at 324 million people as of July 2016.

The US is one of the most ethnically and racially diverse countries in the world due to successive waves of immigration.  Native American tribes lived in what is now the USA for at least 12,000 years prior to European colonization starting in the late 1500s.  The English, French, Spanish and Dutch all made efforts to colonize North America, and they — along with the first African slaves starting in 1619 — constituted the first wave of immigration after the Native Americans.

The second wave in the late 1700s up to the mid 1800s came mostly from northern Europe, especially England, Scotland, Ireland, Germany and the Netherlands.  Many in the third wave, occurring in the second half of the 1800s through 1945, came from southern and eastern Europe, including Italy, Greece,

Over the course of these immigration waves, the United States expanded from 13 original colonies on the East Coast to fifty states, including Alaska and Hawaii, as well as territories and possessions in the Atlantic and Pacific Oceans.

Arguably the two most traumatic events in the history of the United States were the Civil War (1861-1865), which ended slavery yet claimed the lives of more Americans than any other war in which the U.S. has been involved, and the Great Depression, which started with the stock market crash in 1929 and didn’t end until World War II, more than a decade later.  The U.S. emerged from World War II a major superpower with robust economic growth, though sharply rising income and wealth inequality since the 1970s.

Located in North America, the U.S. shares borders with only two countries: Canada to the north, and Mexico to the South, with a long Pacific coast to the west and a long Atlantic coast to the east.  Its land is diverse, with vast plains in the middle, mountains to the west, hills and lower mountains in the east, mountains and river valleys in Alaska, and tropical terrain with volcanoes in Hawaii.  Its climate is equally diverse: more temperate in the east, tropical in Hawaii and Florida, arctic in Alaska, drier and more tempestuous in the central plains, and hot and dry in the southwest.

The U.S. has a variety of environmental issues, both natural and man-made.  These include active volcanoes (in Hawaii, Alaska and the northwest), earthquakes, droughts, mud slides and forest fires in the west, hurricanes and flooding along the Atlantic and Gulf of Mexico coasts, and tornadoes in the midwest and southeast.

The USA is one of the wealthiest and most productive nations in the world, measured by per capita income and gross domestic product (GDP). The US has a diversified economy, but excels in high-technology sectors including computers, medicine, aerospace and military industry.  American companies like Walmart, ExxonMobil and Apple are among the largest businesses in the world, and American music, movies, TV shows and food are popular in many countries worldwide.  For all its economic strength though, the US also has economic problems, including substantial income and wealth inequality, aging infrastructure (e.g., roads, bridges, schools, water and sewer systems), fast rising medical and pension costs due in part to an expanding elderly population, and large budget and trade deficits.

The US is arguably the most powerful nation in the world given not only the size and reach of its military, but also its diplomatic leadership, and cultural and economic influence.  The US is composed of fifty states, a federal district (Washington D.C.) plus a number of territories and possessions in the Atlantic and Pacific Oceans (e.g., Puerto Rico, Guam, American Samoa, U.S. Virgin Islands).

The US government is compos 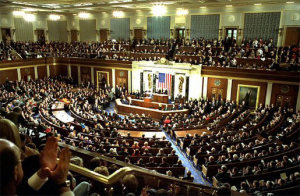 ed of legislative, judicial and executive branches, each with its own powers that are supposed to “check and balance” the powers of the other branches.  This three-branch form of government also largely carries at the state and local levels.  The US government is the oldest living federal republic, and has enjoyed relative peace and stability for most of its history.  Nonetheless, American politics currently suffers from growing political polarization among its politicians and most active voters, and the heavy influence of monied individuals and interest groups.

It is estimated that the US will become “majority minority” — meaning Latinos, African Americans, Asians and other minorities will together outnumber Whites — by 2044. Religiously, the US is fairly diverse — 47% identifying as Protestant, 23% Non-Religious, 21% Catholic, 2% Mormon, 2% Jewish, 1% Muslim, 1% Buddhist, and 1% Hindu — with a trend toward more Americans identifying as non-religious. 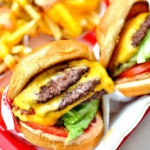 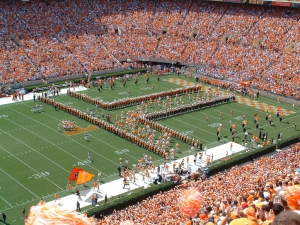 Among spectator sports, football is the most popular, followed by baseball, basketball and hockey.  Americans also spend a lot of time in front of screens, watching movies, TV shows, music videos, and social media feeds from American media companies such as Disney, Time Warner, Facebook, Twitter and Google.

In terms of values which guide thought and behavior, Americans are well known to be more individualistic than collectivistic, yet they nonetheless spend more time and money on associations (athletic, religious, political, professional, educational, charitable, etc.) than many other wealthy, western nations.  Americans often stress the importance of hard work, perseverance, and creativity or ingenuity.  They tend to be friendly and helpful to strangers, though there are personal and regional variations.  They prize freedom above all, and assume equality in everyday social relations but not in economic relations.

Washington — located in the center of the USA’s east coast, and not to be confused with the state of Washington, or other cities and towns across the nation named after the first U.S. President George Washington — was founded in 1791 and is the capital of the United Stares.  It is also known as the District of Columbia, DC, or “The District.”  For fifty years, from 1950 to 2000, D.C. lost population, and stagnated economically due, among other factors, to government mismanagement, racial unrest in the 1960s, a crack cocaine epidemic in the 1980s, and the flight of wealthier residents into suburbs outside D.C.  However, starting in the 2000s, the city has experienced population growth and an economic resurgence.  This resurgence has included rapidly rising real estate (e.g., homes, offices and stores) prices, leading to concerns about the ability of D.C.’s poorest residents to remain in their city. 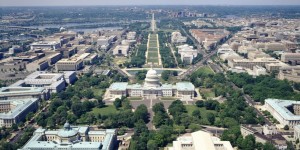 Washington was for many years majority black (some call it “The Chocolate City” for that reason).  It is now slightly less than half  black, and more and more whites and other races are moving into D.C., taking many of the available jobs.  As in the rest of the USA and the world, jobs are substantially segregated by race/ethnicity, with black residents occupying more of the lower-paid, lower-ranked service and administrative jobs. 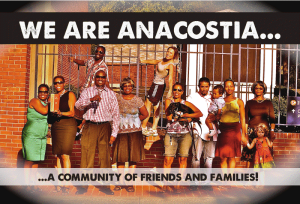 Washington D.C. is composed of eight districts or “wards.”  The Anacostia River divides DC in two, with Wards 1-6 located west of the River, and Wards 7 and 8 on the east side.  These two wards east of the Anacostia River are the two poorest wards in an otherwise rich city getting richer.  The chart below compares Wards 7 and 8 with Washington D.C. and the entire nation, showing large differences, and underscoring how racially and economically segregated the USA (and cities in general) can be.